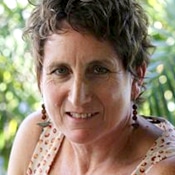 Sue Broadbent brings a comprehensive, career-long experience and knowledge to Brunswick Heads Osteopathy. Sue was introduced to the wonderful benefits of osteopathic treatment following a whiplash injury in her 20s, suffering significant pain and disability and many weeks of ineffective treatment. A friend suggested osteopathy, and in that first session Sue experienced enormous relief from pain, producing a “light-bulb” moment of clarity as to her future career.

Sue is a 1992 graduate of the British College of Osteopathic Medicine in London (previously British College of Naturopathy and Osteopathy). Sue practiced on the English South Coast before relocating to Australia in 2000, practising in Brunswick Heads, Byron Bay and Lismore. In 2010 Sue opened the current premises in Mullumbimbi Street Brunswick Heads and expanded her practice services with reception staff, massage practitioners and Associate Osteopaths, allowing the clinic to operate 6 days per week.

In 2011 and 2012 Sue was invited to join the professional staff at Southern Cross University’s Osteopathic Student Clinic as a Clinical Supervisor. She recommenced this role in Nov 2016. In addition 3rd, 4th and 5th Year Osteopathic students observe Sue in her clinical practice throughout the year as an adjunct to their clinical learning.

Sue is available on Mondays, Wednesdays Thursdays and Fridays.

Instantly Book Online with Sue Below:

Sue is currently on extended leave.

Menu Do NOT follow this link or you will be banned from the site!